Dan Fisher to be new CEO of Ball Corporation

Ball Corporation has announced that Dan Fisher, currently president of Ball Corporation, was elected by its board of directors to the additional role of chief executive officer, on Wednesday, April 27.

John Hayes, 56, who has been Ball’s CEO since January 2011, will remain chairman of the board, and will continue to lead the company’s board activities and support its sustainability advocacy efforts.

“On behalf of our board of directors, we are pleased to elect Dan as our next CEO, the 12th CEO in our company’s 142-year history,” said John Hayes, chairman and CEO. “Dan is a proven and respected leader who has exemplified behaving like an owner, as he has delivered strong operating results through a relentless commitment to our customers, our people and our culture. He is ready for these new responsibilities, and we could not be more excited for our future under Dan’s leadership.”

Fisher, who was promoted to president in January 2021, will retain the title of president as he assumes the CEO role. He has 12 years of executive leadership experience at Ball in a variety of positions, including senior vice president and chief operating officer of the global beverage business from 2016 to 2021, and president of the North and Central America beverage business prior to that. More recently, he has had responsibility for Ball’s aerospace, aluminum aerosol and aluminum cups businesses.

“This announcement is the successful culmination of a purposeful, multiyear succession plan based on John’s desire to step away from day-to-day management. Dan has worked closely with the board over the past several years, and we look forward to the next phase in our development with Dan as CEO,” said Stuart Taylor, lead independent director of Ball’s board of directors. “On behalf of the board, I want to thank John for his dedication as CEO.

“Under his leadership, the company has generated significant value and EVA dollars for its stakeholders while ensuring Ball is truly sustainable from an environmental, social and economic perspective. John’s drive for results—coupled with his focus on the Ball culture and commitment to doing the right thing—have been key to both our past success and positioning the company to capitalize on the many opportunities ahead. I would also like to thank John for continuing as the company’s chairman and facilitating the change in leadership during the transition period.”

“It is an honor to be named the next CEO of Ball Corporation, and I want to thank both John and the board for the confidence they have placed in me to lead this strong organisation,” Fisher said. “Ball is well-positioned for the future, and I welcome the opportunity to continue to work with John as chairman and benefit from his experience as we create value for all of our stakeholders, using Drive for 10 and EVA as our guide.” 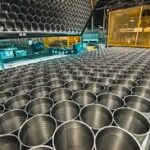