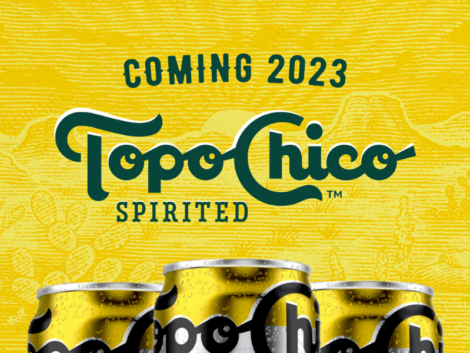 “Consumers are more curious than ever, and we want to be there with them at key occasions, whether at home or in their favourite bars and restaurants,” said David Coors, vice president of next-generation beverages, who introduced Topo Chico Spirited at last week’s Molson Coors Distributor Convention in Nashville.

“A product like this, made with real spirits, real juice and the strength of the Topo Chico master brand, is a natural fit for a cocktail-forward lineup in the RTD space.”

Though Topo Chico Spirited shares the same parent brand name as the hard seltzer, the similarities stop there. Slated to debut nationally in 2023, the RTD cocktail line will launch with tequila and vodka varieties — two of the most popular spirits in the U.S.

Topo Chico Spirited is the latest innovation coming out of Molson Coors’ relationship with The Coca-Cola Company, which has already produced home runs like Topo Chico Hard Seltzer and Simply Spiked Lemonade.

And it arrives at a time when drinkers are increasingly reaching for spirits-based RTDs. The segment grew 53% in 2021, about double the growth of the wine- and malt-based categories, according to market research firm IWSR.

What’s more, Topo Chico Spirited will draw inspiration from some of the most popular cocktails Americans enjoy at home and at their favorite bars and restaurants – many of which feature real juice and sparkling water as key ingredients.

The tie-up between Molson Coors and The Coca-Cola Company has produced a series of winning innovations. Topo Chico Hard Seltzer is the fastest-growing hard seltzer in the last 52 weeks, according to IRI, despite just launching nationally early this year.

Its Topo Chico Ranch Water Hard Seltzer is the best-selling ranch water beverage in markets where it’s sold, according to IRI. And Simply Spiked Lemonade is the fastest-growing new flavoured alcohol beverage on the market, according to IRI.

With Topo Chico Spirited, Molson Coors hopes again to capture lightning in a bottle – or a 12-ounce standard can, in this case – in a category worth billions.

“Getting into spirits is part of the evolution of this company,” Coors said. “We’re laying a foundation not for 2023, but for years and decades down the road. We’re excited to have Topo Chico Spirited play a leading role in that.”