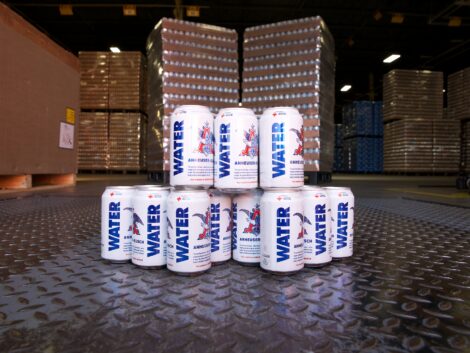 At the request of the American Red Cross, Anheuser-Busch is delivering seven truckloads – more than 360,000 cans – of emergency drinking water to support local communities in preparation for Hurricane Ian in Florida.

As employee safety is the foremost and primary concern, Anheuser-Busch is working closely with its local teams – including at its Jacksonville brewery – to ensure colleagues and partners in the region are safe.

The donation of emergency drinking water will be done in partnership with Anheuser-Busch wholesaler partner, City Beverage, to the American Red Cross operations in Orlando, so that they may distribute the resources to those in need.

“As we all prepare for Hurricane Ian, our thoughts are with our entire community, especially our more than 1,100 A-B colleagues that call Florida home,” said Craig Tomeo, Senior General Manager of the Anheuser-Busch Jacksonville Brewery.

“Our team in Jacksonville is proud of the support that Anheuser-Bush is providing through this critical donation as we come together and prepare for the effects of the Hurricane with our families, friends and neighbours.”