Ska Fabricating has announced a new depalletising machine designed to meet the needs of the craft brewing sector.

Capable of speeds up to 30 CPM, the Microbus depalletiser is optimised for lower-speed applications in the smallest of spaces. The Microbus uses a manual crank, operated by hand or drill, to lift the Pallet Carriage. The Carriage is raised until a layer of containers is level with the Deadplate, then a belt-driven actuator (sweep) pushes the layer onto the 44” OD (Orbital Discharge) Rotary Table.

The patented Rotary Table accumulates the containers, aligns them for discharge, and feeds them into a Rinse Cage and onto a filler. Both the rotary infeed table and the automated sweep can be folded away, further reducing this already small machine’s footprint on the production floor.

The first of The Microbus machines was installed at Mancos, Colorado’s Fenceline Cider, US/ Ska Fabricating collaborated with Fenceline’s production team on a beta test, to which the cidery responded by purchasing The Microbus to expand their distribution capacity without taking up too much space in their small facility. 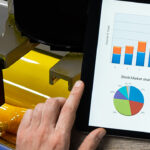 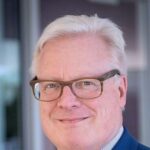 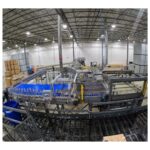 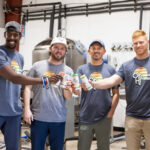