Molson Coors Beverage Co. reported its highest top-line growth figure in more than a decade in the first quarter, buoyed by revenue growth of its two top-selling brands – Coors Light and Miller Lite – a strong performance among its above-premium portfolio and significant growth in Europe due to fewer on-premise restrictions.

The company booked both double-digit revenue and profit growth in the quarter ended March 31, 2022. It marks the third consecutive quarter it has posted top- and bottom-line gains versus the year-ago quarter, a string of success CEO Gavin Hattersley said was supported by continued progress against initiatives set in motion by the company’s revitalisation plan.

“Many of our core brands continued to outperform their peers, we again earned the largest growth in U.S. hard seltzers among major brewers and our expansion beyond beer continued to track ahead of our $1 billion revenue target,” Hattersley said. “All were factors in delivering not just a successful quarter, but the most quarterly top-line growth this company has had in more than 10 years.”

The results, Hattersley said, give Molson Coors “continued confidence in our ability to meet our full-year guidance” of top-line and bottom-line growth, which would mark the first time in more than a decade the company would grow revenues and profits in a full fiscal year. 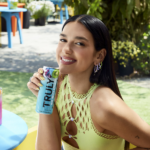