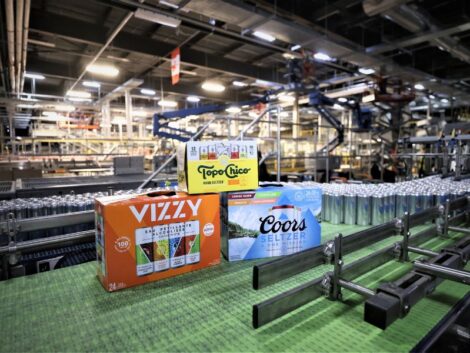 Molson Coors’ breweries in Toronto and Chilliwack, B.C., are now producing flavoured-alcohol beverages, including hard seltzers and FABs, for western and central Canadian markets as part of a $60 million capital investment, the company said.

Beverages such as Vizzy Hard Seltzer and Coors Seltzer, which have combined to snap up nearly 14% of the hard seltzer and soda segment in Canada as of September, are now under production at the breweries, two of Molson Coors’ largest in Canada.

The new production lines are capable of unlocking thousands of additional hectoliters of production each year and dovetail with Molson Coors’ commitment to invest in its capabilities and grow its portfolio of above-premium beverages.

“Investing behind our brewing capabilities is a top priority for Molson Coors,” said David Hamel, general manager of operations for western Canada.

New technology installed as part of the upgrades at the 2019-built brewery in Fraser Valley will help decrease the company’s carbon footprint and its energy and water consumption per hectoliter produced, Hamel said: “This upgrade supports many of our commitments as a company … by ensuring our facilities are pillars of sustainable brewing for years to come.”

In Toronto, the company’s largest Canadian brewery, the modernisation project will allow for hard seltzer and flavoured alcohol beverages to be packaged in standard 355ml cans.

“As Molson Coors’ hard seltzer portfolio continues to see strong momentum, these operational upgrades are immensely beneficial to rounding out our production capabilities in Ontario,” said Tan Le, general manager of the Toronto brewery. “The Toronto Brewery team is proud to take part in this next chapter of our history.”